Will God’s People Fear God to the point of doing the work to defend their families while they can? 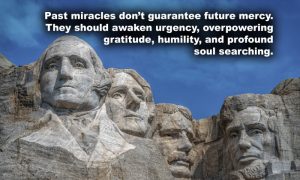 What does it mean to “trust in the Lord with all thine heart?”

“and lean NOT on thine own understanding. In all thy ways acknowledge him, and he shall direct thy paths.” Proverbs 3:5-6

Isn’t it perplexing how the more our ‘doubting Thomas’ society leans toward their own flawed understanding, the more they are swayed by the deception of ‘political correctness’ and refusing to trust in the sovereignty of God?  And let’s be clear we’re talking about the Creator God, “Who upholds all things by the word of His power (Heb 1:3)” and “Who works all things after the counsel of his own will (Eph 1:11).”

For some time, especially since the providential placement of a decisive leader whose actions champion life, liberty and truth as our nation’s head of state, my soul has been in a continual state of uneasiness over the downward spiral of our nation’s culture. While I am truly content to rest in the confidence that God’s providence prevails in His appointment of kings and national leaders, I am also deeply aware that many of us see the apathy and lack of firm reliance on the supremacy of the whole counsel of God being declared by believing church communities in our land. We should be shocked by the lack of bold challenges to God-fearing citizens to rebuild the broken-down walls of our nation to guard the innocent from the enemies that would destroy the liberty that past generations gave their lives to build.

I discovered an excellent article by an old preacher I remember hearing 40 years ago who seems to be submitted humbly to the sovereignty of God and the supremacy of His Word.  He does not appear to be one who wants to do anything less than clearly declare the whole counsel of God. See if you can identify with his opening statement that should spark all of us to contritely thank God for His mercy. (You can read his article at the website linked at the end of this article.)

“I am continually humbled by the grace of God and His mercy on me.  I am very aware how inadequately I am living in a constant consciousness of the fear of the Lord.  I repeatedly revisit the remembrance that one day I will stand before God and give an account for every word I have spoken.  Thanks be to God for His love that covers a multitude of sins by His gift of grace received by His beloved.”

Like the true prophets of the Bible, in reverential fear, the author reminded me of one of the saddest stories of our nation’s history.  It was the occasion of the death of the man who was honored by his own contemporaries as the beloved father of our new American nation, George Washington.

Today’s American church family desperately needs to be reminded of an analogy here.

Retired President Washington died because of medical malpractice.  In his time the misguided professional medical doctors believed in a falsehood that led them to literally bleed George Washington to death.  Washington was only 67 years old.  He had completed his eight years as president only two short years earlier, after leading the continental army to victory over the British empire through nearly five long years of unimaginable hardship and sacrifice in the ‘Revolutionary War.’  He contracted pneumonia. In their ignorance of modern pathology, they believed that congestive infection like that was due to “bad blood” in his body. The remedy was to deliberately bleed sick patients.  Washington was already weak from his sickness, but they decided to do what was fairly routine for them.  They drained several pints of blood from his arm.  When the symptoms continued, they bled even more of his life-sustaining blood.  If only they had heeded the wisdom of Leviticus 17:7 – “the life of the flesh is in the blood.”  But by draining the blood out of a man weakened by pneumonia, the doctors made him weaker and finally killed him.  It was the worst thing they could have done.

Today’s American church of Jesus Christ sorely needs to see a vitally important analogy here.  The idea that any of us has some kind of personal entitlement to God’s blessings without contrition before a righteous Judge is preaching a stunted gospel of “cheap grace.” And it is literally bleeding an already weakened church. Such thinking produces a careless apathy and cowardice that helps set us up for national destruction. Can you imagine how wickedly glad our enemy, Satan, would be if we continue to fall for this trap? Instead of a life-giving conviction and a robust will to fight – to actually trust God to help us take action by participating in the battle to preserve our liberties – a warped gospel induces drowsiness and more indifference.

“Past miracles don’t guarantee future mercy.  They should awaken urgency, overpowering gratitude, humility, and profound soul searching.  Throwing ourselves off the cliff of morality to prove the power of Grace tempts God and provokes wrath.”

We thank God for the faithful pastors who are boldly declaring the whole counsel of God to their churches with courage, regardless of the increasing spiritual warfare they endure in the process. However, we are aware from nationwide studies and polls done by numerous reputable research groups like Barna, that the lukewarm church in America is going backwards. As much as 88% of young people raised in churches are leaving the faith of their fathers. Up to 30% of generation X, Y, and Z young Americans consider themselves without a faith or atheist. Way too many men, including pastors are hooked on porn. Most of us are afraid to speak up for the unborn, the oppressed, and those being enslaved by the sensual, demonically inspired demons of our age. Does it even matter to most people anymore that we are forsaking the clear Biblical command to teach Bible truth to our children daily?

1 Chronicles 12:32 tells “of the sons of Issachar who understood the times, to know what Israel ought to do.” The chapter tells of the military talent of each Israelite tribe.  Issachar’s weapon was the gift of “understanding the times.”  Do you think that if we were reminded regularly that we are recruited into spiritual warfare when we are born into Jesus’ family of sons and daughters that we might be more attuned to Biblical principles of our mission?  For starters, the very idea of our call to offensively anticipate victory over the “gates of hell” should be a daily reminder.  Why not pray with fellow Christ-followers who desperately see the need for God to give us men with God-inspired insight like He gave the Sons of Issachar?

Wrath comes when you do not properly respond to mercy

In 2 Chronicles 32:25 we read, “But Hezekiah did not repay according to the favor shown him, for his heart was lifted up; therefore, wrath was looming over him and over Judah and Jerusalem.”

The Word of God for this generation today is abundantly clear, but who’s listening?

God has obviously extended His mercy to our wicked generation, and that includes His own people who are too timid to speak up, lead, and take authoritative action over the works of the devil in our age. In humility that will happen when God’s ordinary saints who love Him dearly do three things: Revive, Repair and Rebuild.

Revive – We must fervently seek a fresh outpouring of God’s Holy Spirit.  Our assemblies of the saints must cry out to God with hearts of gratitude and plea for His sovereign refreshment of our spirits.

Repair – America desperately needs prayer-filled spokesmen (like prophets of old) to boldly declare God’s righteousness. This only will send the demons of hell into retreat. The righteous (living disciplined  in humble forgiveness) are as bold as a lion (Proverbs 28:1).

Rebuild – your children will raise up the old foundations when you practice the true Biblical spiritual vitality as defined in Isaiah 58:6-12 – the “fasted lifestyle” that God chooses.  Pastors must rebuild their sermons from the ground up.  We don’t need entertaining stories. We need God’s inspired word by hearing plenty of Bible verses.  Let’s talk of our mighty God.  Let’s fill our conversations with content the Holy Spirit can use to reach lost or floundering souls!  People need a fresh rediscovery of the Good news.  The gospel must once again roll off our tongue in the workplace, on campus and at the mall.

Who cares that 90% of the church’s children are deliberately given over to be trained by teachers working for the Canaanite gods of evolutionism, humanism, and the idolatry of self, so dominant in today’s society? Big pharma and Hollywood have more sway in society than true Christ followers. Hardly anyone in most churches is actively part of a discipleship lifestyle to influence others by witnessing and mentoring. Many Godly radio ministries are delivering valuable Bible teaching and providing excellent resources. And yet, we keep getting a steady church diet of self-help and how to cope with basic issues of life. Meanwhile Christians in many parts of the world are suffering persecution and martyrdom that is seldom, if ever, discussed in a Sunday service. Why not?

Could it be that those few of us who would like to speak up are not being given the opportunity because the message doesn’t conform to the heretical agenda of porridge being served to try keeping people in church?

If you know the truth that will free people from the chains of deception and do not tell them, what does the Bible tell us about our accountability to God?

Ezekiel 33:6 tells us clearly that the watchman who sees the destructive storm coming to his people but doesn’t warn them, is guilty of their lost lives.

Must we allow our society to become as decadent as Rome before a modern Telemachus takes a public stand for righteousness against the brutal insanity that drives our post-modern world? See the story of Telemachus at http://www.prayerfoundation.org/favoritemonks/favorite_monks_telemachus_coliseum.htm .

For the article written by the man of God referenced above, see this link: