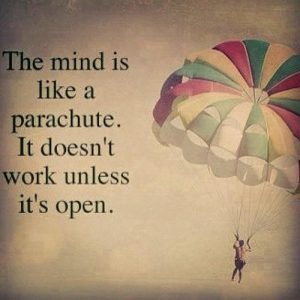 Whose Lives Can You Influence With Positive Benefits?  Who Are the People You Want To Talk To?

Who Are the Ones Most Open Minded To What You Have To Share With Them?

To everyone who absolutely loves to help other people,

Unless you love ‘beating your head against the wall’ and constantly feeling like you are in the business of ‘convincing’ people against their will, you must finally come to grips with the fact that there are really only a minority of the people out there who are even interested in hearing what you have to say.  Who are they?  You can find them easily because their mind is actually working— and working in their favor..  It kind of reminds you of a parachute… It only works when it’s open!  It’s the open-minded people who are actually willing to discover something that they don’t know and are willing to really admit that they don’t know what they don’t know.

Do you want to know how to spot those who are open-minded?

Open-minded people are constantly excited about their personal discovery of new things.  But more importantly, they’re eager for developing their life.  They’re serious about improving their health.  And they truly want to be better stewards of their resources.  They’re not afraid to be ACTIVE receivers of the blessing of the Apostle John’s wish where he said, “Beloved, I pray that in all respects you may prosper and be in good health, just as your soul prospers.” (3 John 2).

How can a person honestly say they want to receive the goal of that prayer IF they’re unwilling to do their part to adjust their attitudes and behaviors that will enable the desired result to manifest in their own life?

Have you noticed that our society has unfortunately promoted a rather negative and cynical attitude that easily rubs off on many people who are inclined to be more pessimistic than optimistic?

Now I realize that you have to try your best to get along with everybody.  But does that mean you have to ‘spin your wheels’ wasting much of your energy and time with people who really don’t want to better themselves?

There’s an important lesson we need to learn from the Master Teacher, Jesus Christ, who said that you need to “shake the dust off your feet” and move on.  Imagine that.  Even when you’ve got the most life-changing and positive message to give someone, if they don’t receive what you have to say, pack up and find someone who is OPEN.   There’s a reason it says “the humble shall inherit the land and delight in abundant prosperity” – the humble one is the one who knows he doesn’t know it all and is open to hear what you have to say – explore undiscovered realms of life-building insights.

It isn’t a bad idea to start out a conversation with someone and ‘take their temperature’ to see if you’re going to have a short conversation or if they’re someone who you might want to dive a little deeper with.  Try something like: “Hey, I thought of you and wondered if you’re open to see what I’ve been discovering lately.”  If they respond with cynicism, sarcasm or condescension, just tell them, “Oh, that’s okay, did you hear the weather forecast for next week?” and move on to other topics.  Don’t even try to engage their mind.  It’s not working anyway!  Remember the parachute?

On the bright side, don’t let their pessimism wear you down.  Be encouraged with the hope that there really are a lot of people out there who are plenty happy to hear what you have to share with them.  Start asking questions that reflect your honest care for people.  Ask them what would make them happier than they are right now.  Ask them if they’re open to a new idea.  Ask them if they’d like to make a difference in the lives of those they themselves care about.  Ask them if they have taken the course you just learned about on how to …be healthier, …save more of their hard earned money, or …leverage their time to get more done and have more time to do the things they like to do.

With some people, if you’re brave, you might even be able to ask them something like this: “You wanna know what I learned about people that are open?  … Turns out that they are the same people who like to better themselves, improve their health and make more money so they can do more good in the world!”  Then you could follow up with another question like, “Can you think of anybody who thinks like that?” … and laugh with them if they seem to be good natured enough to engage with you.

You might think that everybody wants to solve their problems and find solutions for the things that cause them pain in their life.  But if they really did want that – solutions for their problems – then why aren’t they actively pursuing it?  Sometimes we have to rekindle the hope, inspire the optimism and rebuild the curiosity that makes people want to discover new things.  Just be careful not to ‘cast your pearls before swine’ if you know what I mean.  For an energetic young optimist, that’s one of life’s hardest lessons to learn.  The only ones you can help… really help… are those who really want to be helped.  You ‘gotta wanna’ have the results bad enough to exercise some initiative to get what you want.  And if a person doesn’t respond to you with some energy …some interest …some sincere curiosity, you must not let them drag you into an argument that goes nowhere.

So, don’t forget this one.  It’ll save you a lot of wasted time and energy.  Test the waters.  Ask some good questions to see if they’re open.  Don’t be afraid to taunt them a little bit if you have a good rapport with them.  But don’t ‘show your hand’ too soon.  See if they’re ready to activate their mind.  And when you’re confident that they are ready, just give them a few nibbles to see if they really want more.  Make a plan with them to talk again later and see if you have something that really can help them.  Let the curiosity factor ‘work’ on their subconscious.  That way they’ll be ready to hear you with both ears when you’re with them again.