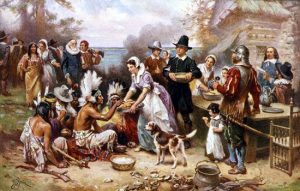 Did you know that Thanksgiving is a uniquely American holiday?  Other countries, like Canada, may have another holiday they have given the same name, but the concept originates with the heritage of America before there was ever a nation called the United States and continued on as a profound tradition through its formative years.

Did you ever discuss with your family exactly why we have such a day devoted entirely to the idea of such a noble activity as the “giving of thanks?”